Teignmouth Sings’ second performance of the year, at the Riviera, was enjoyed by an audience of over 150 people. The evening provided an entertaining mix of classic pop songs and medleys. These included recent additions to the repertoire, and others sung previously, reworked to include further harmonies.

Before the interval, the audience was treated to songs from ‘West Side Story’, ‘The King and I’, and an uplifting medley from ‘Mamma Mia’. The Soprano section performed a pleasing three part harmony arrangement of ‘Annie’s Song’.

The second set included ‘Hallelujah’, featuring the Tenor and Bass sections of the choir. ‘Dream a Little Dream’, another arrangement of three parts, was ably sung by the Altos, and received well by the audience. Soloist Colin, from the Tenors, sang a confident ‘Let’s Face the Music and Dance’.

Thanks go to a number of choir members and other volunteers who provided help leading up to, and on the evening of the performance. Many thanks also to those involved in the performance, including Musical Director, Jeff Hocking and Accompanist, Lydia Dockray. 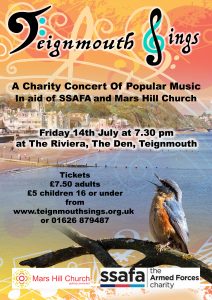 The evening raised in the region of £1250. This will be shared between the Armed Forces charity, SSAFA, and the Mars Hill Church, whose members are renovating the Riviera, in order to provide a community hub.