This year, we were pleased to have been asked to lead the carol singing at the Teignmouth Christmas Lights Switch On. This took place on Saturday 26th November.

On the evening of Thursday 15th December, from we sang a number of Christmas songs and carols in the Teignmouth Waitrose store. There was a ‘bucket collection’ in aid of Children’s Hospice South West, and we raised £158. Thank you to everyone who supported us and came along to enjoy the festive singing.

Teignmouth Sings sang at Teignmouth URC’s Candlelight Service on the evening of Sunday 18th December. Nearly sixty members of choir were present to lead the singing of carols. The choir sang five pieces, including a beautiful arrangement of ‘O Holy Night’.

Well done to all those in Teignmouth Sings for another crowd pleasing performance! Highlights from the choir’s recent evening concert were performed in the marquee on the Den, the last of the season before the summer break, as part of an afternoon of song from local choirs. All pieces were well received by the audience, many of whom who sang along to the numbers.

A wonderful occasion was enjoyed again, at Our Lady and St Patrick’s Church, Teignmouth, on the evening of Friday 1st July. Not only was well over £1000 raised for CAFOD, but Teignmouth Sings entertained another ‘sell-out-plus’ audience, just short of 200. A further lucky seven tickets were sold on the door.

The audience was impressed by the range of music sung, with a number of them passing on their compliments to choir members during the interval and after the performance. Some new additions to the repertoire included ‘Sway’, when the choir was accompanied by Lydia playing the bongo drum, rather than the usual piano! Other new items included ‘Windmills of your Mind’, and some of Irving Berlin’s famous show pieces, in a medley entitled ‘America’. This began with the punchy ‘There’s no Business like Show Business’ and ended with a rousing ‘God Bless America’. The Alto section, in three part harmony, beautifully performed ‘The Rose’, made famous by Bette Midler. Tenor Colin very proficiently sang ‘When Autumn Leaves start to Fall’.

The performance fell on the centenary of the start of The Battle of the Somme, and began with a respectful silence of two minutes. A fitting ‘Jerusalem’ and ‘Rule Britannia’ brought the evening to a close, and as at the more famous Prom, allowed for audience participation.

A huge thank you to all those in Teignmouth Sings for a marvellous evening of song!

Members of Teignmouth Sings were proud to be included in the town’s celebrations on the sea front, and thankfully the rain stayed away for us! Not so the breeze… but our accompanist, Lydia, managed very well, as did the choir.

The short programme of our popular and newer pieces was appreciated by all who were there. A number could be seen tapping feet and singing along. Our final piece, the rousing ‘Rule Britainnia’ encouraged the audience to participate, and we were asked to reprise this for an encore.

Many positive comments were made following our performance. This occasion was also the first time members of Teignmouth Sings had worn the ‘summer uniform’ option of black and white, which went down very well.

A short but lively performance was thoroughly enjoyed at Bitton House, as part of Teignmouth’s Twinning Society celebrations.

Unusually for the choir, and a first for us, our ‘stage’ included the staircase in the hallway of the House. This provided the opportunity for all to be seen, and allowed for wonderful acoustics.

The programme included a range of our pieces, old and new. We were led by our very able accompanist, Lydia, who took to a mini bongo for our newest song, ‘Sway’ (Ruiz & Molina). That certainly had everyone swaying; choir and audience alike!

Comments following our singing were complimentary, and thanks go to all involved.

Teignmouth Sings was invited to round off a Christmas lunch at The Strand Centre, Dawlish, with a short performance of some of our seasonal pieces. This provided the opportunity to showcase, for the first time, a beautiful arrangement of ‘Pachelbel’s Canon and The First Noel’, along with other new items and the more familiar Christmas tunes.

Although there were fewer singers present than is usual, our repertoire was appreciated by the small audience, who happily sang along to well-known Carols, and listened intently to our new pieces.

Our main Christmas performance, on Friday 11th December, was for the benefit of Shane Hooper’s family at this poignant time. Very kindly, a donation was made by our Dawlish audience, in advance.

The first set of our Christmas performance included a number of popular pieces which we have sung through the year, from Andrew Lloyd Webber and Beatles medleys, to a cappella pieces, such as ‘Something Inside so Strong’. ‘Windmills of your Mind’ had its first outing, which we sang better than we had ever done in rehearsals. ‘Bohemian Rhapsody’ was another of the audience’s favourites.

Our Christmas pieces were sung in the second set, and these were very much enjoyed by the audience. As well as pieces we had sung in previous Christmas sets, we were able to include ‘Walking in the Air’, and the afore-mentioned ‘Pachelbel’s Canon and The First Noel’ arrangement became our finale.

Another first, a small group of six, from our Soprano and Alto sections, sang beautifully ‘The Coventry Carol’. Two well known Chrstmas songs, ‘Have yourself a Merry Little Christmas’ and ‘The Christmas Song’ (Chestnuts roasting on an open fire) were sung proficiently by members from the Bass and Tenor sections, respectively.

It was pleasing to see the audience participating in ‘Hey Jude’, and singing along during the performance. They also joined us to sing two Carols: ‘Once in Royal David’s City’ and ‘O Come all Ye Faithful’.

All in all, this was a great performance, which put everyone in the Christmas spirit. Funds raised from the evening, including generous donations from the Dawlish and Teignmouth United Reformed Churches, amounted to £603.57. Thank you to all who donated in any way; your generosity is much appreciated, particularly by Shane’s family. A variety of vouchers have been purchased for the three children, to the value of £200 each.

Our final Christmas performance was at the ‘Carols by Candlelight’ service at Teignmouth URC. We sang four Christmas pieces, along with hamonies and descants in the congregational carols.

Merry Christmas to all!

The torrential rain stopped, and the sun made its appearance, about an hour before we were due to assemble on the Den. Our opening number for our Carnival singing this year was Chattanooga Choo Choo; a brilliant opener, as it contrasted so well with what had gone before.

As we sang though our numbers, it was evident that the audience enjoyed our set, of both a cappella and accompanied pieces. We scored very highly on the smile rate too, due to encouragement from our accompanist, with her own smiley face reminder each time we looked at her! An audience member standing at the very back of the marquee mentioned that we were very easy to hear, as our volume was perfect and our enunciation made our singing much clearer. Those weekly warm up exercises of ‘Ted’s got a head like a ping pong ball’ obviously paid off, as did those reminders to smile!

We were very well received by an appreciative audience who had struggled to attend through inclement weather; it’s so rewarding that there are so many people in Teignmouth and the local area who will come out to see live music.

Our penultimate performance of this year was a short set at the Alice Cross Funday, on the Den. Our song list rehearsed, everyone confident and ready to sing… and then the breeze whipped up. As a result, some fumbling of musical scores ensued, and our accompanist and leader for the day, with the aid of a choir member holding the pages as much as turning them, thankfully managed to follow the score! ‘Whistle down the Wind’, one of our chosen pieces, was certainly very apt!

Our audience was appreciative, and we sang a variety of accompanied and a cappella songs. This included, for its first time in public, the Everly Brothers’ classic, ’All I have to do is Dream’.

Below is a note of thanks received from the manager of the Alice Cross Centre:

Thank you so much for your inspiring performance on Saturday. You brought our wonderful day to a wonderful close and we are very grateful.

You helped us to raise £1800 on the day, which will be used to help cover running costs for the Alice Cross Centre.

Many thanks for all the good work you do helping organisations like ours to raise funds.

Our Spring concert on the 5th June 2015 was as far as we know the only concert in Teignmouth Sings’ history where we actually sold all available tickets… and SOLD OUT had to be pinned to the door!

This was a super concert, a long time in the planning, preparation and rehearsing. The venue of the newly refurbished Our Lady and St Patrick’s was probably the best we had ever sung in as regards its acoustics, not to mention the warmth of our reception from the Church and the large audience.

Brand new for this concert were Something’s Coming and Tonight from West Side Story.In rehearsal we’d been a little nervous about performing these complicated compositions with their intricate harmonies, subtle key & time changes – but all went well on the night!

Other offerings include our big sets of the Andrew Lloyd Webber medley, Beatles in Review, Fiddler on the Roof, Mamma Mia, and to finish off with …..Les Misérables.

To add variety we seasoned liberally with He Ain’t Heavy, Bohemian Rhapsody, Rhythm of Life, To Make You Feel My Love, Something Inside So Strong a cappella …

The proceeds from this concert will support concert the work of CAFOD,  the official aid agency of the Catholic Church in England and Wales( part of Caritas International), which helps those in poverty and in crisis overseas. The picture below from the Teignmouth Post shows a ‘big cheque’ for £1200.00 being handed over by committee members to Marcia Doherty of CAFOD.

Take a look at the gallery page to find a selection of photographs from the evening. 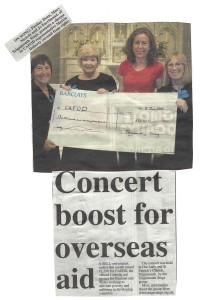 This was an evening that Teignmouth Sings had been looking forward to for a long time….. 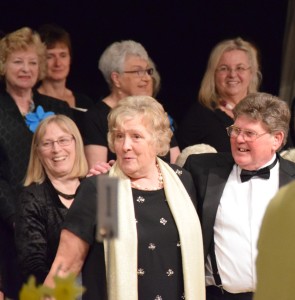 A local couple, Anita and Michael Bartlett, contacted us in late 2014 to ask if we would sing for a special event they were organising at the Langstone Cliff Hotel in Dawlish Warren – their  Golden Wedding Anniversary!

Anita and Michael liaised with Teignmouth Sings as regards choice of music, and wanting their special occasion to be a little different, had hit on the idea of their guests donating to chosen charities rather than presenting them with gifts.

Guests assembled for dinner early evening in the the Washington Ballroom, and our one hour mid-evening performance  included a new medley learned specially for the occasion,  ‘Beatles in Review’ arranged by Ed Lojeski *

So that we were offering the guests a good selection from down the years we also sang:-

Sing a Song *  Whistle down the Wind * Close to You

At the end of the performance we presented Anita and Michael with a congratulatory bouquet and a card signed by members of the choir. The money raised by the event for Children’s Hospice South West was £405.

We were recorded by a member of the audience singing Chattanooga Choo Choo…. 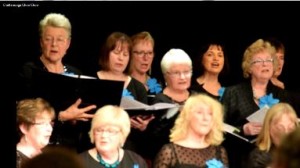 * The Beatles in Review is a popular selection for choirs –  if you are interested click on the following links:-